ABOUT THE SHAKESPEARE SHOPPE 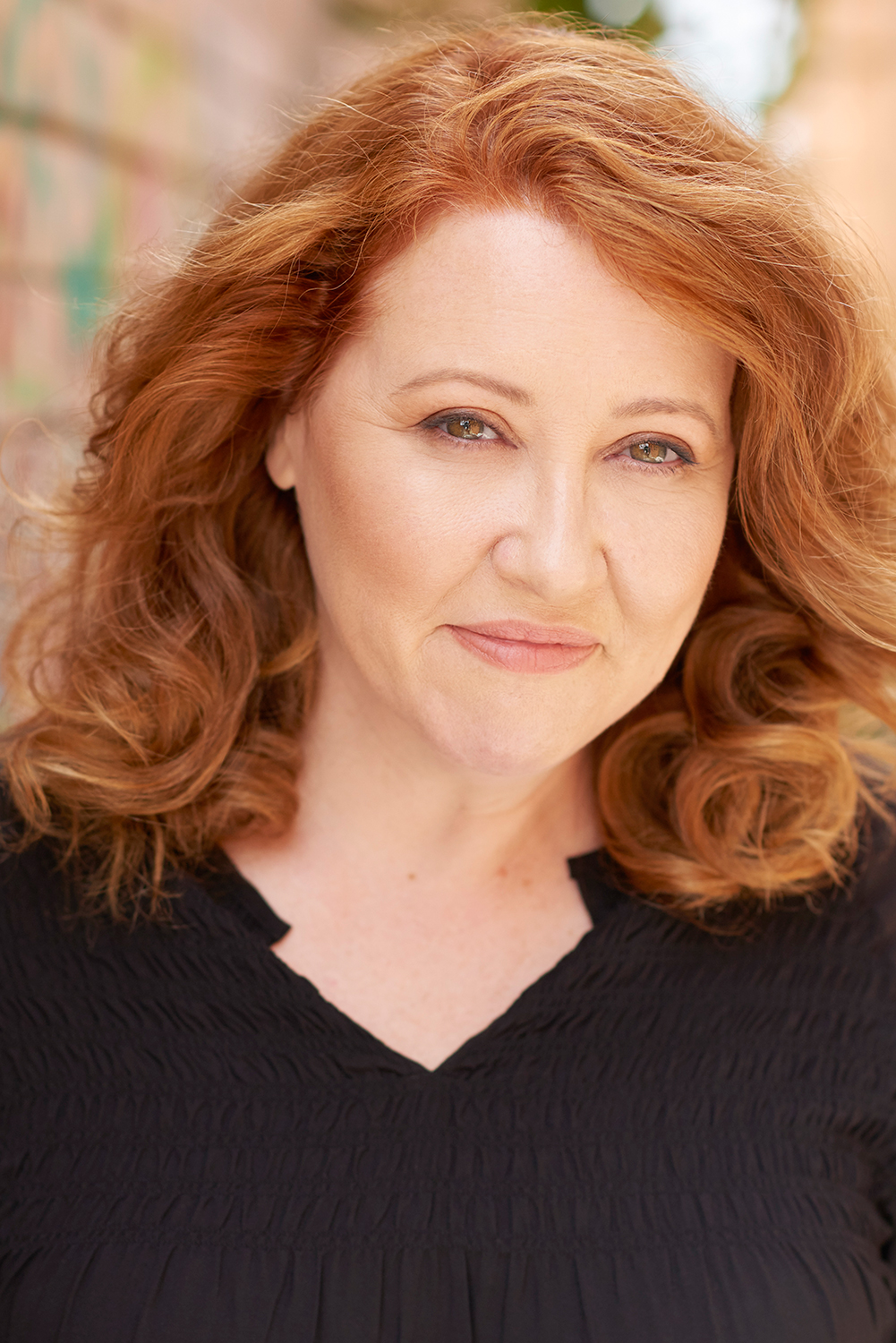 Actress, screenwriter, director and playwright, Sally McLean began her work in the entertainment biz as an actor in her mid-teens and has since performed leading roles in numerous Australian and British film, theatre and television productions. And she's a little obsessed with Shakespeare.

A graduate of The Actors Institute, London, with further studies undertaken with Howard Fine, David Coury and faculty at HFAS Australia, Sally McLean has played roles in over thirty UK and Australian theatre productions, including Flame Trees, Uncle Vanya, The Auxiliary, Chasing Pegasus (a play in ten chords), The Clairvoyant, P.S I Love You, the Australian Premier of I Love You, You’re Perfect, Now Change and the World Premier of Annabel’s Requiem on the West End.

Sally has also played Shakespeare in both Australia and the UK, playing roles in Macbeth and Hamlet in the UK before performing for three seasons with the Australian Shakespeare Company in their critically acclaimed productions of The Comedy of Errors and Romeo & Juliet.

Her work behind the camera began with the BBC as a member of the Books & Special Projects Unit in BBC Music & Arts. This led to her writing and producing her first film A Little Rain Must Fall in London in late 1996, thought to be the first TV-length drama to be shot on DV tape in the UK, and to her forming her production business Incognita Enterprises under the Honorary Patronage of Sir Nigel Hawthorne – an association that continued until his passing in 2001.

Sally began her work in graphic and web design in 1997, working predominately for entertainment industry clients including Alan Fletcher ("Dr Karl Kennedy" on Neighbours) and Grammy award-winning composer and musician, Tor Hyams.  She began her work in t-shirt and accessories design in 2005, creating and running online stores The Shakespeare Shoppe and Incognita Store, which continues to the present day.

Sally has written and produced a number of short films and two theatrical productions (which she also directed), and is currently writer/director/producer for her first feature-length documentary, due for release in 2020, as well as being Creator and Artistic Director for the award-winning web series, Shakespeare Republic, which has now screened at over 80 film festivals internationally, been nominated for over 70 awards and won 25 of them to date, including the prestigious CINE Award (USA) for Best Digital Series. Other industry activities include serving as an official Jury member in both acting and screen craft categories for the AFI Awards, AACTA Awards and ATOM Awards since 2010.

Sally continues to work in Australian theatre, film and television as an actor as well as developing several projects for both the big and small screen as writer and producer.

"Redbubble is quite simply the finest and most diverse creative community and marketplace on the interlink. There, we said it. With artists and designers hailing from every corner of the globe, displaying eye opening talent, skill, passion and enthusiasm for all forms of creativity there really is no better place for you to get your artistic kicks."

So say Redbubble on their "About" page, and it's true.  Redbubble have been in the business of selling print-on-demand t-shirts and prints since 2009.  They have now extended their product range to phone covers, skirts, leggings and more and continue to add new items on a regular basis.  And their HQ is in Melbourne, Australia, which for us here at The Shakespeare Shoppe is a huge thing - as we're also Melbournians and we love to support local.  So, that's why we are focusing so heavily on our Redbubble store and building this portal to all the items we have available there.

But it's not just because Redbubble is local to us (in the next suburb from where we are located, as a matter of fact), or that we can drop by their offices at any time for one of their regular mixers to hang out with some rather amazing local artists who are also promoting their work on their platform, that we sell with them.  It's also because they have such a huge focus on those who provide the work that they as a company sell and make their profit from - the artists.  We get to set our own commissions, their customer service when looking after any issues we might have is top notch and the community they have built up where we artists get to talk to each other online (and IRL at their regular talks & functions), as well as make use of the amazing amount of tips and articles Redbubble make available on their blog and forums about designing for print, as well as promotion ideas, coupon deals and more makes it a truly unique place on the interwebs to hang out and make some cash from what we create.

Photo on left: Montage of Redbubble's city-wide event ART+MEL in November 2015 at their Hub in Federation Square, Melbourne, featuring products with designs from 100+ of Redbubble designers (the beds the general public are lying all over are all covered by cushions and duvet covers by Redbubble artists as well).  Photo by The Shakespeare Shoppe Designer, Sally McLean. 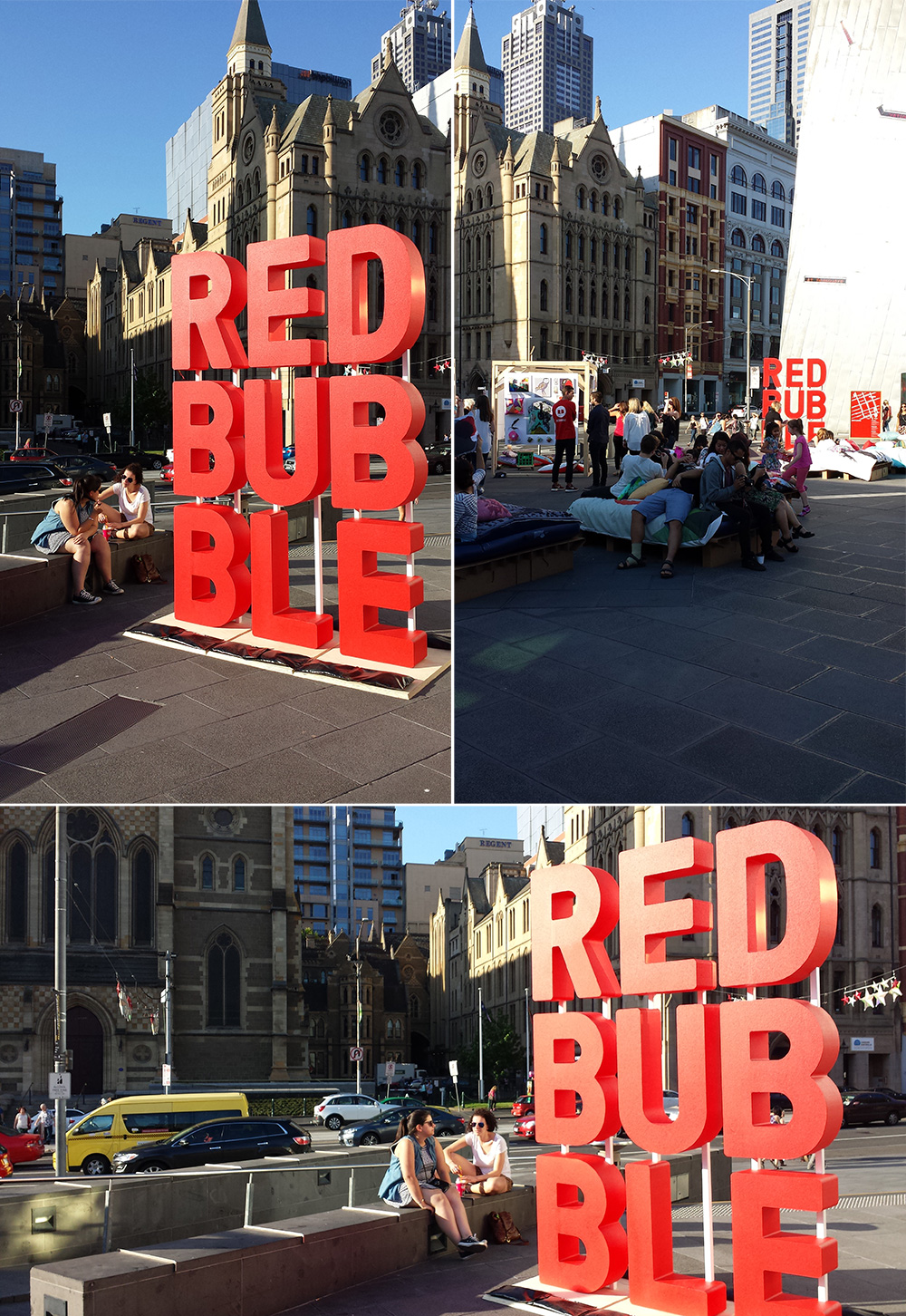 So that's a little about Redbubble from our perspective.  To hear from them direct, have a look at this video interview from May 2016 with CEO Martin Hosking on The Capitol Network.

"Printful is an on-demand order fulfillment and warehousing service that fulfills and ships products including clothing, accessories, and home & living items for online businesses."

Printful's name is a combination of the two essential parts of the company's service—print products and fulfilment. Printful have been in the business of selling print-on-demand products since 2013.  They have now extended their product range to phone covers, skirts, leggings and more and continue to add new items on a regular basis.  Their HQ is in Charlotte in NC, USA, but they are 1000-person team spread out across eight locations in North Carolina, California, Mexico, Barcelona, Australia and Latvia.

And they do more than printing and shipping. Printful's 90+ developers are always working on new tech to further develop and improve their service.

But it's not just because Printful are now local to us (20 minute drive from where we are located, as a matter of fact), that we sell with them.  It's also because, just like Redbubble, we get to set our own commissions, their customer service when looking after any issues we might have is top notch and the technology integrations they are constantly providing and expanding make our job so much easier as designers to do the thing we got into this business for - to create unique, fun, different designs that express how we see the world. Also, Printful began in a designer's living room - just like we did and that kinship cannot be discounted - they know our story, because it's their story (and they're now a multi million dollar business who have printed and fulfilled over 12 million items since 2013). 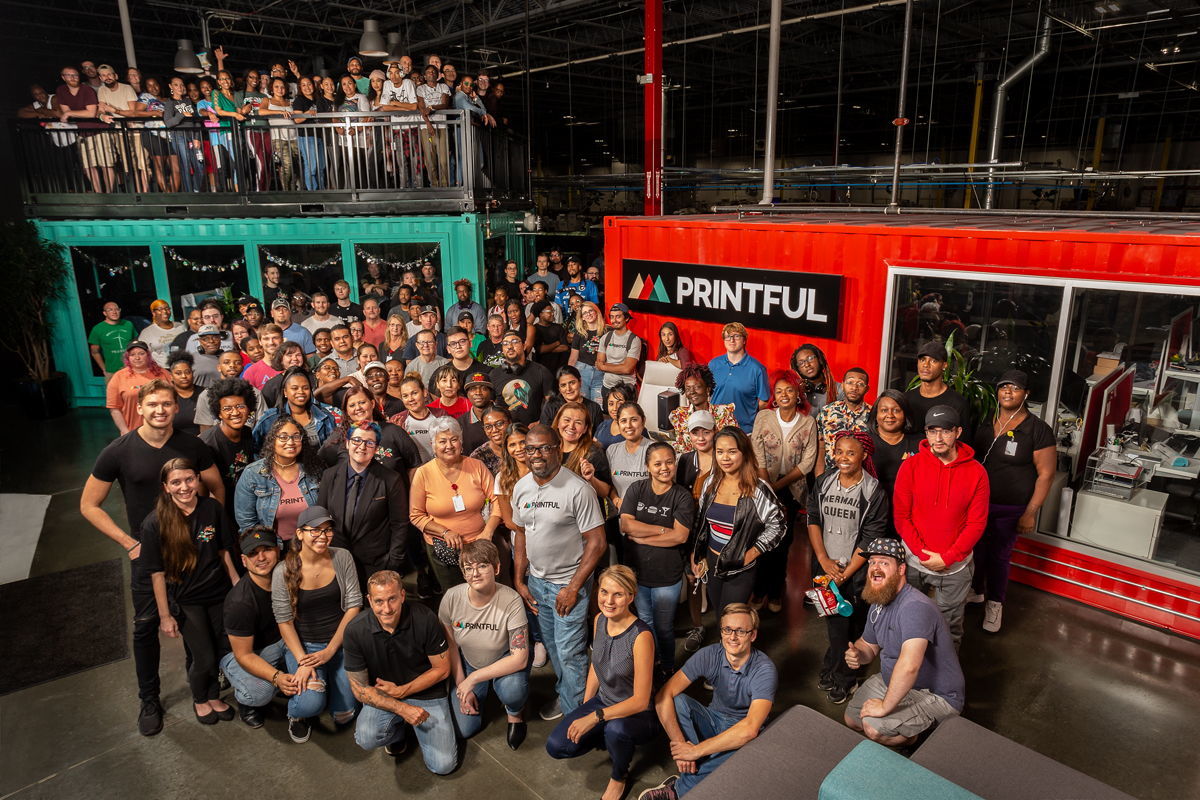 So that's a little about Prinful from our perspective.  To hear from them direct, have a look at this video below: